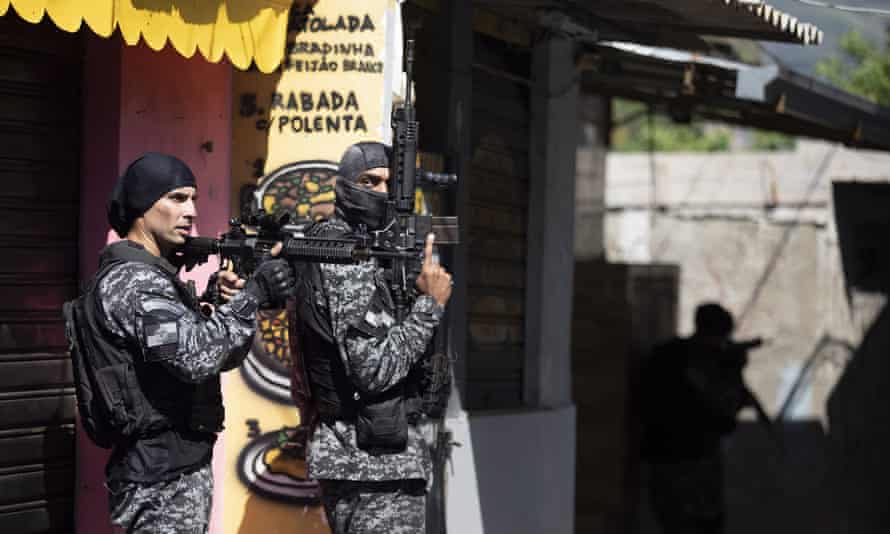 At least 25 people have been killed after heavily armed police stormed one of Rio de Janeiro’s largest favelas in pursuit of drug traffickers, in what activists called one of the deadliest raids in the city’s history.

About 200 members of Rio’s civil police launched their incursion into Jacarezinho in the early hours of Thursday, sprinting into the vast redbrick community as a bullet-proof helicopter circled overhead with snipers poised on each side. By lunchtime at least 25 people were reported dead, among them André Frias, a drug squad officer who was shot in the head. Police and local media described the other victims as “suspects” but offered no immediate evidence for that claim.

Photographs and videos taken by residents and shared with the Guardian showed bloodied corpses splayed out in the favela’s narrow alleyways and beside the heavily polluted river from which Jacarezinho takes its name. The lifeless body of one young man had been propped up on a purple plastic garden chair, with one finger placed inside his mouth.

Police officials and their cheerleaders in Rio’s tabloid press celebrated the mission as an essential attack on the drug gangs who have for decades used the favelas as their bases. “It would be great if the police could launch two operations like this every day to free Rio de Janeiro from the traffickers, or at least reduce their power,” the host of Balanço Geral, a popular television crime show, told viewers saluting what he called the “surgical” strike.

But there was outrage from human rights activists and public security specialists as the scale of the carnage became clear.

“It’s extermination – there’s no other way to describe it,” said Pedro Paulo Santos Silva, a researcher from Rio’s Centre for Studies on Public Security and Citizenship. “This was a massacre.”

Pablo Nunes, a public security expert from the same group, said the assault had claimed more lives than one of the most notorious slaughters in Rio’s history: the 1993 Vigário Geral massacre in which 21 people were shot dead when police rampaged through a favela just north of Jacarezinho. “It is unbelievable, despicable,” said Nunes.

Located in north Rio, a 20-minute drive from Ipanema beach, Jacarezinho is home to tens of thousands of working-class Brazilians and has long been a bastion of one of Brazil’s most important criminal organizations, the Red Command.

Rio’s decades-long war on drugs – which has intensified since the mid-1980s and claims thousands of lives each year – has done nothing to change that reality, with Jacarezinho’s streets policed by the gang’s rifle-toting gunmen and barricaded with concrete blocks and barricades improvised from train tracks.

Thursday’s raid, which police said was to prevent children and teenagers being lured into crime, took place despite a supreme court order last June outlawing such incursions during the coronavirus pandemic. The number of police operations in the favelas fell dramatically after that decision but has been increasing again since last October. Recently released figures show police killed 797 people in Rio state between June last year and March, the overwhelming majority in or around the capital.

Santos Silva said his city’s war on drugs was effective when it came to killing but did nothing to protect citizens or reduce crime. “It’s repugnant,” he said of the photographs showing Jacarezinho’s streets littered with dead bodies.

“Irrespective of whether they were ‘traffickers’ or residents, these are lives, these are bodies – somebody’s child, somebody’s brother,” Santos Silva added. “There’s no way of looking at these photos and not wanting to cry over just how sick our society it.”